Why Latin? It's a Puzzle! 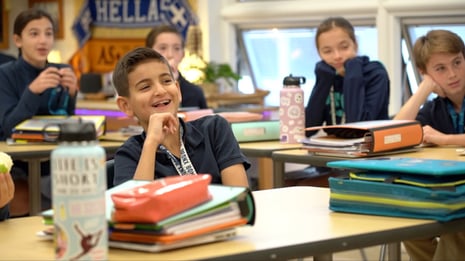 (Narrator) Hi I’m Chris Starr, Communications Specialist at The Peck School, and on today’s podcast we are asking the question, “Why Latin?”

Latin, I teach it. At The Peck School.

I think we’ll use that one.

(Narrator) After some initial difficulties finding a working microphone, I sat down with David Marshall to get his lowdown on Peck’s Latin program.

(David) Ah, my name is David Marshall. This is my fifteenth year teaching Latin and my second year at The Peck School.

(Narrator) Perhaps because of his boisterous presence in the classroom and his highly energetic approach to teaching, I can see why students love David’s energy. But I wondered, why the subject itself? Why Latin - especially in a middle school? I thought it was ancient history.

(David) Latin always gets the moniker of, like, the dead language. But really, it’s never gone away. Latin has been the Lingua Franca through the ages. Through the destruction of Rome. Through the renaissance, the middle ages, everything, up until now. Latin is kind of making a come back. I think schools appreciate it because it forces students to pause and puzzle through things.

(Narrator) Hmm. Puzzle through things. That sounded perfect for a school like Peck with our focus on student-centered learning, inquiry, and problem-solving.

(David) Because you can’t just look at it and know what it says.

(David to students) Sixth grade, you make me happy! What about “grandma?” I mean, you know what I really mean.

(David to students) Messenger! Say it!

(David) So we finished review and it was just like four little sentences but they were challenging because you had to, you couldn’t just look at the sentence and know what it means. Word order is completely random with Latin. You really have to puzzle through word for word, look at every single ending, figure out how the endings are connected, and then put it all together. The analogy is that it’s always like a puzzle.

(Narrator) It certainly sounded like a puzzle to me!

(Back to classroom scene – David and students)

(David to students) You were very close though! Pagano? What have you got?

(David to student) Come on. Masculine nouns end in what two letters?

(David) English really depends on word order. So you have the subject, you have a verb, and you have the predicate. Latin is completely different. Because of the endings, each ending is like a road sign that tells you what its function is in the sentence.

(Narrator) I was already feeling exhausted just picturing it!

(David) A student has to keep all of those endings in mind. Know what all of them mean. Know what the words mean, and then be able to put it all together.

(Narrator) David shared his very unique background with me and how he came about becoming a Latin teacher.

(David) I did not go to a school that offered Latin. I went to a magnet school that my Mom found out about through the paper. From third grade up until my senior year in high school, more than half of my classes were taught in French. As a student, I hated it. I resented it. I wanted my Mom to pull me out of this program. All my friends were in normal school and I was in this French school all by myself.

(Narrator) I thought about getting David’s Mom on the phone at this point but decided against it.

(David) But I think that that deep, entrenched experience in languages, since third grade, definitely caused some neural pathways to develop that I didn’t realize until I got to college. And this professor inspired me to take Latin, and he said, “by the end of the first semester, half of you are probably going to drop out of this.” And I’m like, did I just make a huge mistake. What am I doing?

(Narrator) I also thought about getting in touch with David’s college professor but there just wasn’t enough time.

(David) Low and behold, by the end of that first semester, I was, you know, near or at the top of my class. Um, and that success, ah, felt good.

(David) It was just one of those natural inclinations. My students always ask, “When you go home, do you talk to your wife in Latin?” Because that’s all my life is, is Latin?

No. Obviously, I’m multi-dimensional. Thank you very much!

(Narrator) Another missed opportunity. I should have contacted David’s wife about that! Anyway. David mentioned that there was actually quite a big debate about the purpose of Latin and how it should be taught.

(David) What is the purpose of Latin? How should you teach Latin? So the old school approach is the grammar-translation approach, where...

(David) You learn a grammatical concept. Then you translate passages or sentences that contain that grammatical concept for reinforcement. That’s how I was taught. It can be boring. In the wrong hands that approach is deadly. Um, and I think that’s why some Latin programs have, let’s be honest, died. Other Latin teachers think that…

(David) The reading approach is the most, so you read as much Latin as you can, and a student will intuitively pick up the grammatical patterns of the language. And then there’s this third rung, where it’s, ah, you treat it like it’s a modern language…

(David) Ah, you speak in it as much as possible. You engage with the language as much, even if it’s artificial. You just keep that language living in your classroom.

(Narrator) So what’s the best approach?

(David) So I try to do all three with various degrees of success. But when I think about in the end, like, why do students take Latin? Like, what is the point of it? For me the point is to read the literature that was written 2000 years ago because there are so many beautiful things in it. The kind of added benefit of that is it’s going to help them with their writing. It’s going to help them in their English classes. And it will help them think more analytically which I think is an important life skill to have.

(Narrator) I told David my own impression of Latin was primarily obtained by old movies. You know, old British boarding schools where kids were forced to learn Latin.

(Chris) Yeah. That should have died out…

(Chris) … as a subject, because everybody talks about it in such a negative way.

(Narrator) But David really brings Latin to life in his classrooms, and especially at this sixth to eighth grade age group.

(David) I mean it blows my mind that as eighth graders, they will have had three and a half years of Latin. But what I want them to leave with is really, that they were a part of, like, a community. I want their voice to be heard. I want them to feel that their voice matters, especially at this level in the middle school. I think that is almost as important as the curriculum.

(Narrator) Well. We were out of time. But, I wanted to compliment David on his beautiful classroom. It’s one of the most richly decorated in the Upper School.

(Chris) But your classroom’s really heralded at school.

(Chris) It’s one of the nicer classrooms because it’s really nicely decorated. Like, you create an ambiance. It’s like part of what you were just saying.

(David) That’s. I want them to feel comfortable.