Did you catch Peck's own Ben Brown on the premiere of MasterChef Junior on Fox during March Break? 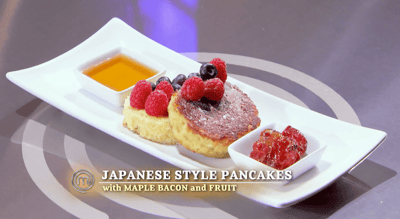 In the episode, Ben and the other junior home chefs were challenged with making a breakfast dish for the judges. Ben chose Japanese-style Pancakes. His dish was well-received and spotlighted on the episode. Judge Christina Tosi commented that Ben brought an incredible amount of talent to the MasterChef Junior kitchen. Wow! So, we asked Ben to share his premiere recipe with us!

"I chose Japanese pancakes because I like the lighter texture and that they are a bit sweeter," Ben said.  "In Japan, they have pancakes as a dessert. Even though they appear thick, they are airy - so you don’t get too full. I love how food looks and is presented, so I love the look of Japanese pancakes."