It's Scary to Talk About Failure

Note: The Ben Alexander Grant for Faculty Enrichment at The Peck School is awarded to one or more faculty members each summer. Up to $2,500 is available for a personally enriching experience that demonstrates the growth mindset and sincere interest of the applicant. A proposal for the grant need not relate to their teaching responsibilities at Peck. The following story poignantly illustrates that growth and success do not always travel hand in hand.

CHELSEY CARR - UPPER SCHOOL ENGLISH TEACHER AND DEAN OF STUDENTS, 7TH AND 8TH GRADES:  My four year old son, Matthew, recently asked to go to the jet pack store. He wanted to fly and saw the purchase of a jet pack as an obvious substitute to the gift of wings. Matthew instructed me to research a store on my phone’s map; I did my own research -- on Pinterest. Finding DIY jet pack instructions, we set out to gather the materials. We bought, emptied, and dried two 2 litre bottles; went outside, spread newspaper on the driveway, and started to coat the plastic with silver spray paint. Only, the nozzle became stuck. The freon continued to spray, but not the paint. So, with one green plastic bottle still green, we moved inside and waited for the painted bottle to dry. Later, we cut felt and glued it along with shot-sized red Solo cups to create the boosters -- and, no, I did not have these on hand. Once Matthew was harnessed into the contraption, I waited for his reaction. How did our homemade jet pack stand up to his expectations? Did it feel like half-painted empty soda bottles were stuck to his back? Or, like he was one with a machine, a jet pack, revving and ready to take him to new heights? I braced myself for a response.

But, I never had a guitar.

For most of my life, as it unfolded, a soundtrack has played. An undercurrent of melodies, both learned and impromptu, have been hummed, whistled, and sang throughout the households of my parents on both sides. My maternal grandfather is a retired choral director, and his wife, my grandmother, an accomplished pianist and organist. Sleepovers at their house always consisted of frosting freshly baked sugar cookies and falling asleep to the sounds of their baby grand piano. For some reason, costumes from a high school production of The Sound of Music were kept in an upstairs closet; my cousins and I would dress up and play. Being the eldest, I wore Fraulein Maria’s beige wool dress and straw hat. But, I never had a guitar.

Throughout my childhood and well into college, I participated in various musical activities: concert choirs, chamber singers, church choirs, piano and violin lessons, and school and community orchestras. While living in England, I traveled to Salzburg, Austria just to take The Sound of Music tour and stay in the home where they filmed the movie. While spinning in a field high in the Alps, I still did not have a guitar.

I still did not have a guitar.

When I accepted the English teaching job at The Peck School, in Morristown, and made the move from California to New Jersey in order to be with my then fiancé, now husband, Mike, I was ready for (most of) the life changes that come with a new job, new home, new marriage, and living in a new state. It was exciting! Eventually, we added two new members to the Carr lot, and new experiences that come with being parents. What never quite made the cross country journey, however, was the musical undercurrent of my West Coast life. Perhaps the emotions that are attached to so many of the musical pieces were too much to face so far from home or that the connections I had with music felt too different in a new environment. Whatever the reason(s), I focused on other things.

Just as Captain Von Trapp’s children reminded him of how important it was to have music in the house, it was my sons, Matthew and Nathan, who reminded me. They LOVE to drum, pluck, ring, sing, and play. I figured it was time for a guitar. So, last Winter, when the grant committee sent their creative calls for submissions to the Ben Alexander Grant for Faculty Enrichment, I was admittedly hesitant. With two small children at home, my summer was already full. But, it kept calling to me, like the mountains called to Maria. So, I asked for a guitar, lessons, and a trip to Washington D.C. to see The Sound of Music at the Kennedy Center.

The guitar arrived. We were all excited. Little hands plucked the strings and left fingerprints on the varnish. I gripped the neck in my palm and expected to strum and sing an awe inspiring version of what Julie Andrews is perhaps best known for at the opening faculty meetings when school reconvened at the end of the summer.

See what I did there...I set my expectations. And I set them high.

In June, my son Matthew and I travelled to D.C. for the performance at The Kennedy Center. We spent the first day riding the Metro, walking the Mall, and lingering in museums. It provided us some much needed time together and I was struck by how grown up he had become. The second day, we arrived at the Kennedy Center and took our seats, excited to see our beloved musical live. The performers were excellent. At intermission, Matthew asked why Maria had longer hair and why Captain Von Trapp wasn’t so mean, why the puppet show wasn’t a puppet show, and why the children never went in the lake. Ahhhh...adaptations. He expected the film version, on stage. And, to some extent, so did I. We spoke about the differences of stage and film. Matthew opened his mind and suspended reality enough to see beyond as well as enjoy the differences. By doing so, he reminded me to do the same.

Later in the summer, while visiting my family in California, my dad brought his guitar down from the attic as well as one of my old violins for Matthew to try. My dad played and sang his best Neil Young impersonation and then handed the guitar to me. I tried to tune it, and broke a string. We packed it and ourselves into the car and headed to the Folk Music Center, a store in the heart of town. This almost 60 year old store is owned by the family of musician, Ben Harper. In fact, he strung my violin bow once upon a time. Pretty cool. Ben’s mother, Ellen was manning the shop and when I shared my quest, she offered to have me come into the store to practice. During the next few weeks, my dad’s guitar and I went into the shop, I sat and practiced. Ellen would walk by and correct the position of my fingers and strum the strings, her hand on top of mine. Sometimes others would be in and I’d just watch and listen to them play. When my brothers and their families were around, the guitar was there as well. They’d play, we’d all sing. I’d show my progress, one chord at a time. They’d chide me as only brothers do.

Back in New Jersey, I received an email reminder about the required upcoming grant recipient presentations at the opening faculty meetings. I panicked. The very cool, very polished, very musical performance I expected myself to be ready to give was not ready. I was not ready. Back in the winter, I had envisioned my end-of-summer self a confident, natural guitarist.

At the opening faculty meetings, I stood before my colleagues having not met my own, personally set expectations. Instead of an end product, they saw me in process.

On a daily basis, we deal with expectations: our own expectations, those assigned to us by others and those belonging to others about themselves. Expectations test us, put us through the proverbial fire. They can be tricky to manage. They can overwhelm, crush, and diminish. But, they can also challenge, inspire, and strengthen.

I was challenged this summer as I physically returned to music. My fingers fumbled and my hands worked to coordinate. I was inspired this summer as I emotionally returned to music. The time Matthew and I spent together, the songs and laughs my family and I shared, are invaluable. I am strengthened by having experienced, once again, the learning process. A new soundtrack has developed and plays in our home; this updated version, however, includes Raffi and Springsteen. Thank you, The Peck School, for supporting and expanding this area of my life.

It’s scary to try something new. It’s scary to not be as good at something as you expected yourself to be. It’s scary to talk about failure. But, you know what isn’t scary? Talking about process. And, as we enter this new academic year, focused on process, I encourage us all to remember the expectations that our students hold, that their parents set. I encourage us all to examine our own expectations, of ourselves, our colleagues, our students, and of our programs. Be challenged, inspired, and strengthened by your expectations, realistic or not. Because you never know when you’ll be asked to go to the jet pack store. And when that jet pack store does not yet exist - just like my awesome guitar skills - you must buckle down, create, and believe that what you’re working on will make a difference.

And as for Matthew’s take on the homemade jet pack? 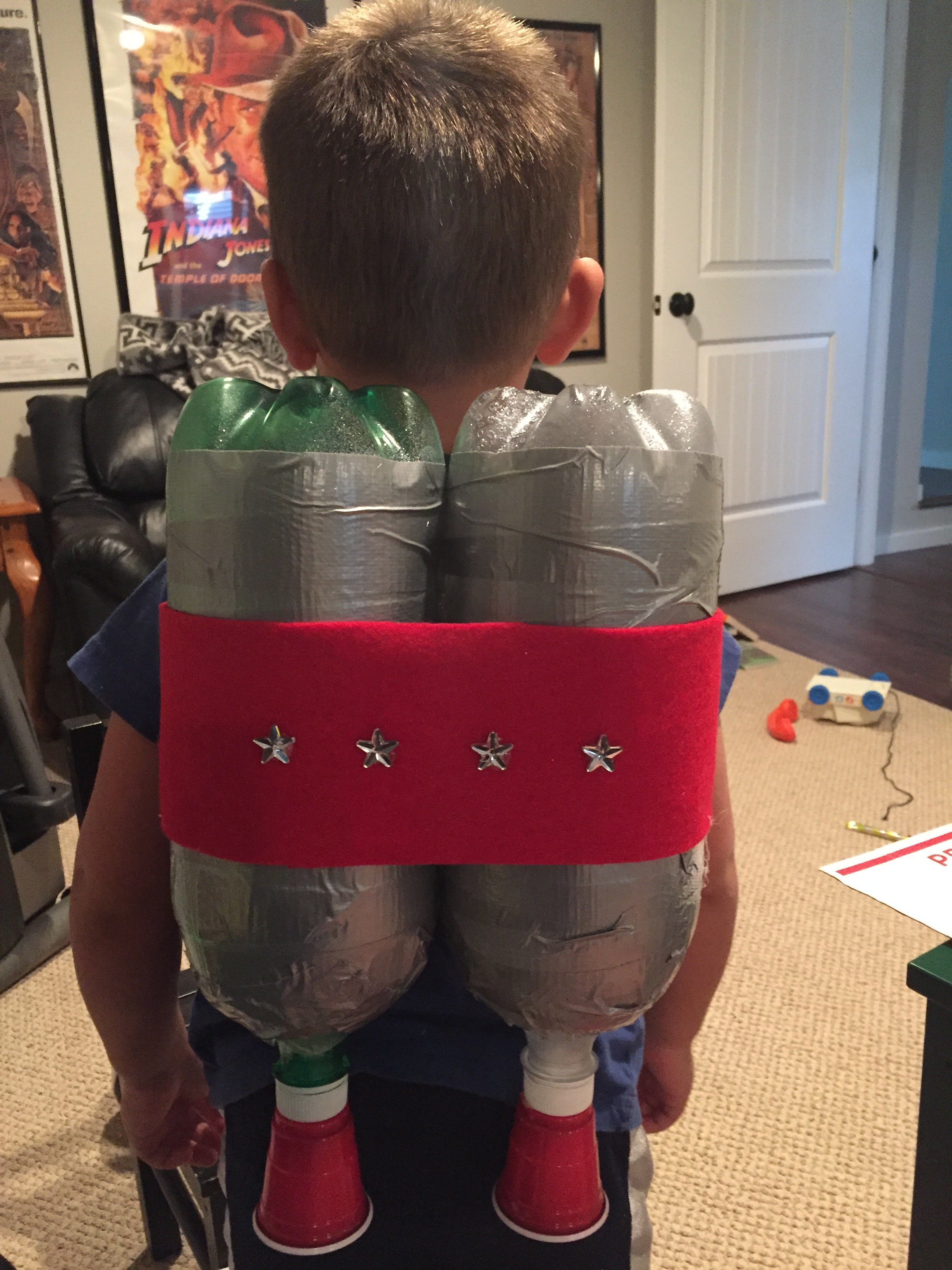